Sterilization for Women and Men – FAQ 011

Sterilization for Women and Men 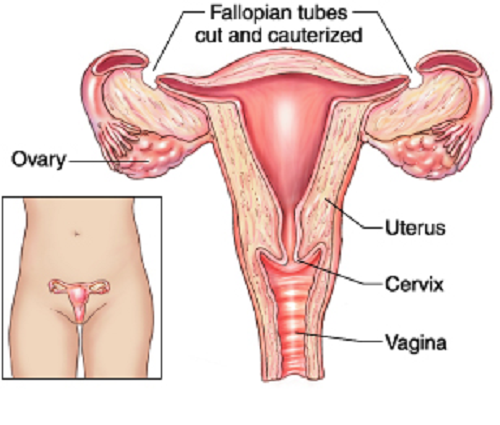 How does a vasectomy work to prevent pregnancy? 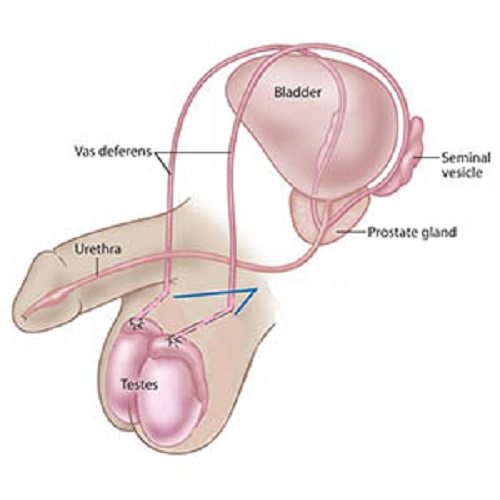 The vas deferens is one of two tubes that carry sperm from the testes. In a vasectomy, these tubes are tied, cut, clipped, or sealed to prevent the release of sperm. This prevents a woman’s egg from being fertilized with the man’s sperm.
How effective is a vasectomy?
The effectiveness of vasectomy in preventing pregnancy after 1 year is slightly higher than that of female sterilization. As with female sterilization, vasectomy does not protect against STIs.
How is a vasectomy done?
One or two small openings are made in the skin of the scrotum. Each vas deferens is pulled through the opening until it forms a loop. A small section is cut out of the loop and removed. The two ends are tied and may be sealed with heat. This causes scar tissue to grow and block the tubes. Each vas deferens then is placed back into the scrotum. There also is a “no-scalpel” technique that does not require incisions in the skin. It can be done with local anesthesia in a health care provider’s office.
How long does it take for a vasectomy to work?
It takes about 2–4 months for the semen to become totally free of sperm. A couple must use another method of birth control or avoid sexual intercourse until a sperm count confirms that no sperm are present. In this test, the number of sperm in a semen sample is counted.
What are the benefits and risks of vasectomy?
Vasectomy generally is considered to be safer than female sterilization and requires only local anesthesia. Also, there is no increased risk of ectopic pregnancy if the vasectomy fails. Risks of vasectomy include minor bleeding and infection. Major complications are rare.
Can sterilization be reversed?
Sterilization is permanent birth control and is not meant to be reversible. Before having the procedure, you (and your partner, if appropriate) must be certain that you do not want children in the future. If you have a sterilization procedure and you change your mind after the operation, you can have surgery to try to reverse it, or assisted reproductive technology can be used to attempt pregnancy. These procedures are expensive and may not be covered by insurance. There also is no guarantee that you will be able to become pregnant afterward.
Glossary
Ectopic Pregnancy: A pregnancy in which the fertilized egg begins to grow in a place other than inside the uterus, usually in one of the fallopian tubes. Egg: The female reproductive cell produced in and released from the ovaries; also called the ovum.
Fallopian Tubes: Tubes through which an egg travels from the ovary to the uterus.
Human Immunodeficiency Virus (HIV): A virus that attacks certain cells of the body’s immune system and causes acquired immunodeficiency syndrome (AIDS).
Hysterosalpingography: A special X-ray procedure in which a small amount of fluid is placed into the uterus and fallopian tubes to detect abnormal changes in their size and shape or to determine whether the tubes are blocked.
Hysteroscopic Sterilization: A sterilization procedure in which the opening of each fallopian tube is blocked with scar tissue formed by the insertion of small implants, preventing sperm from entering the fallopian tubes to fertilize an egg.
Hysteroscopy: A procedure in which a device called a hysteroscope is inserted into the uterus through the cervix to view the inside of the uterus or perform surgery.
Laparoscope: An instrument that is inserted into the abdominal cavity through a small incision to view internal organs or to perform surgery.
Laparoscopy: A surgical procedure in which an instrument called a laparoscope is inserted into the pelvic cavity through a small incision. The laparoscope is used to view the pelvic organs. Other instruments can be used with it to perform surgery.
Local Anesthesia: The use of drugs that prevent pain in a part of the body.
Mini-laparotomy: A small abdominal incision used for a sterilization procedure in which the fallopian tubes are closed off.
Postpartum Sterilization: A permanent procedure that prevents a woman from becoming pregnant, performed soon after the birth of a child.
Scrotum: The external genital sac in the male that contains the testes. 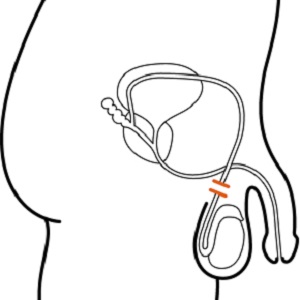 Semen: The fluid made by male sex glands that contain sperm.
Sexually Transmitted Infections (STIs): Infections that are spread by sexual contact, including chlamydia, gonorrhea, human papillomavirus infection, herpes, syphilis, and infection with human immunodeficiency virus (HIV, the cause of acquired immunodeficiency syndrome [AIDS]).
Sperm: A cell produced in the male testes that can fertilize a female egg.
Sterilization: A permanent method of birth control.
Testes: Two male organs that produce sperm and the male sex hormone testosterone.
Tubal Occlusion: Blockage of the fallopian tubes.
Uterus: A muscular organ located in the female pelvis that contains and nourishes the developing fetus during pregnancy.
Vas Deferens: One of two small tubes that carries sperm from each male testis to the prostate gland.
Vasectomy: A method of male sterilization in which a portion of the vas deferens is removed.
If you have further questions, contact your obstetrician-gynecologist.
FAQ011: Designed as an aid to patients, this document sets forth current information and opinions related to women’s health. The information does not dictate an exclusive course of treatment or procedure to be followed and should not be construed as excluding other acceptable methods of practice. Variations, taking into account the needs of the individual patient, resources, and limitations unique to the institution or type of practice, may be appropriate.
Copyright August 2014 by the American College of Obstetricians and Gynecologists