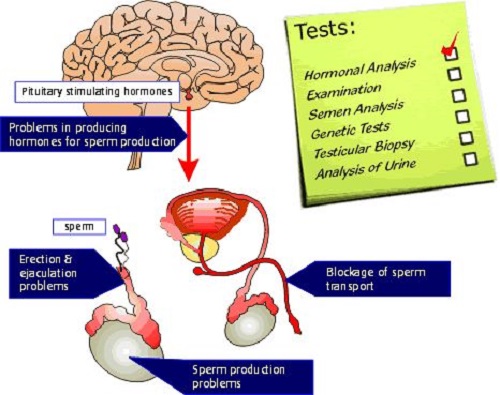 [one_half last=”no” spacing=”yes” background_color=”” background_image=”” background_repeat=”no-repeat” background_position=”left top” border_size=”0px” border_color=”” border_style=”” padding=”” class=”” id=””] When a couple has trouble having a baby, there’s about a 50-50 chance that the man has a problem contributing to the pregnancy.
He might:
• Produce too few sperms to fertilize an egg
• Make sperm that are not shaped properly or that do not move the way they should
• Have a blockage in his reproductive tract that keeps sperm from getting out
If you might have a fertility problem, your doctor will want to perform a complete history and physical, as well as several tests to find out what may be causing your infertility.
Semen analysis
Semen analysis is probably the first test you will be asked to perform. Semen is the fluid that is released when a man has an orgasm. Semen carries the sperm in fluids that should nourish and protect it. You will typically be asked to provide a semen sample by masturbating into a sterile glass jar. If masturbation is not culturally acceptable, your doctor can provide you with a special condom in which to collect semen during intercourse.
The semen analysis provides a lot of information about the quantity and quality of both semen and the sperm it contains. Some of the things that are measured are:
• How much semen a man produces (volume)
• The total number of sperm in the semen sample (total count)
• The number of sperm in each milliliter of semen (concentration)
• The percentage of sperm that are moving (motility)
• If the sperm are the right shape or not (morphology)
The analysis can also suggest if you have an infection in your reproductive system.
The semen sample has to be tested within an hour of collection, which usually takes place in the doctor’s office. You’ll probably need to make two visits to provide samples on two different days more than two weeks apart because samples from the same man can be different at different times. Collecting two samples makes it easier to tell if something really is wrong. You may be asked not to release sperm (ejaculate) for 2 to 5 days before you provide a sample.
Hormone levels and reproduction 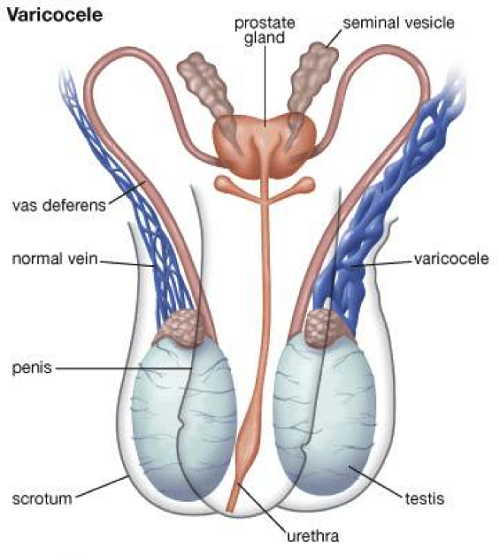 Important chemicals in your body, called hormones, control sperm production. They also affect your interest in sex and your ability to have sex. Too much or too little of these hormones can cause problems with sperm production or trouble having sex. Two important hormones for reproduction are follicle-stimulating[/one_half][one_half last=”yes” spacing=”yes” background_color=”” background_image=”” background_repeat=”no-repeat” background_position=”left top” border_size=”0px” border_color=”” border_style=”solid” padding=”” class=”” id=””] hormone (FSH) and testosterone (T). Your doctor may do blood work to check to see if you have the right amount of these hor- mones. If indicated, your doctor may check other hormone levels, including luteinizing hormone (LH), estradiol, and prolactin.
Other testing (that may not be necessary in most men) If the semen analysis test results aren’t normal, you may need to have more tests that can be performed by your doctor or you may be referred to a urologist. These tests will show:
• If enough sperm in the semen sample are alive (“vital staining” test)
• If antibodies have attached to sperm, making it hard for the sperm to move properly (“anti-sperm antibodies” test)
• If you have an infection or inflammation that affects your semen (“peroxidase staining” and “semen culture”)
More tests (but these won’t be necessary for most men)
If you’ve had the tests described above, but your doctor still does not know why you are having problems, additional tests may be necessary. These tests will tell your doctor:
• If the outer layer of the sperm is broken or intact (“hypo-osmotic swelling” test)
• If your sperm are moving the way they should (“computer-assisted semen analysis”)
• If too many of your sperm have broken or fragile DNA (“sperm DNA testing”)
If you produce very few sperms (or if you produce no sperm), your doctor may want to perform a genetic test to see if there is anything abnormal with your genes that makes it impossible for you to produce sperm. These tests can also tell if there is a problem that you could pass on to a child. These tests will tell your doctor:
• If your sperm have the correct number of chromosomes (sperm aneuploidy testing)
• If you have a chromosome defect (chromosome analysis and/or Y-chromosome deletion testing)
• If no sperm are seen (determine if the sperm tubes are intact or perform a biopsy of the testicles)
No semen test can fully predict fertility. Other than a semen analysis, not all tests discussed are appropriate for every couple.[/one_half]