What do I need to know about conceiving after tubal surgery? 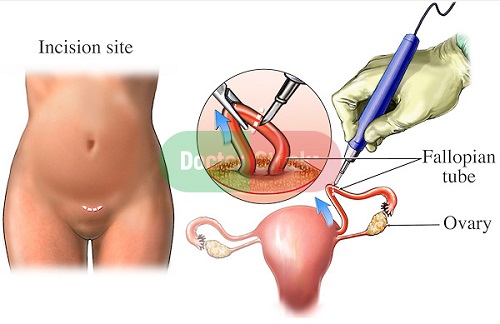 Infections or surgery in the abdomen or pelvis can cause blockage of tubes by forming adhesions (scars). These adhesions can be between the end of the tube and the ovary, inside the tube, or completely block the tubes. Two common sexually transmitted infections (STIs) that can damage tubes are chlamydia and gonorrhea. Occasionally, non-STI infections can cause tubal damage. For instance, tuberculosis can cause tubal disease (although it is very uncommon in North America). Tubal damage can also be caused by the rupture (bursting) of the appendix. Any surgery in the abdomen or pelvis can also cause scar tissue, including common surgeries like removing fibroids or operations for ovarian cysts.
Endometriosis is a common gynecologic condition that can be associated with damage to your tubes. Women who have pelvic pain, pain during sex or painful periods, and are also having trouble getting pregnant may be at risk of endometriosis.
How can the damaged tube/s be fixed?
The success of tubal surgery depends on where the tube is blocked and how severe the damage is. Different surgical techniques are used depending on the location of the tubal blockage. The goal of surgery is to open the tubal passage if possible by either removing scar tissue, creating a new opening in the outside of the tube (closest to the ovary), or opening up the tube from the inside (cannulation).
If the blockage is at the end of the tube closest to the ovary, then surgery is performed either with:
• Laparoscopy (through a telescope placed through a tiny incision through your belly button)
• Laparotomy (traditional open surgery performed through a much larger incision made in your abdomen [belly]).
• Both the surgeries are performed under anesthesia at the same time. If the tubal blockage is inside the tube closest to the uterus then hysteroscopy (a telescope placed through your cervix and into your uterus) is used to place a tiny tube (cannula) past the blockage. This is typically done along with laparoscopy (see ASRM booklet titled Laparoscopy and Hysteroscopy).
Will I be able to get pregnant? 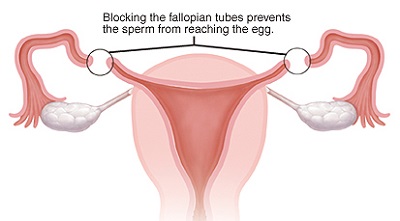 The chance of becoming pregnant after tubal surgery depends on 3 factors: the amount of damage to the tubes, the health of the partner’s sperm, and the age of the woman. If the tubes are badly damaged or remain blocked even after surgery, a woman may be able to get pregnant through in vitro fertilization (IVF) (see ASRM fact sheet titled In vitro fertilization [IVF]). In IVF treatment, eggs and sperm are collected and joined outside the body in a laboratory. After 3-5 days, the healthiest fertilized eggs (now called embryos) are placed into the womb, where they can grow into a pregnancy. If the sperm count is low, going straight to IVF may be recommended because this treats both tubal disease and low sperm counts.
What are the risks of tubal surgery?
The biggest risk after tubal surgery is the possibility of a tubal pregnancy, also known as an ectopic (outside the uterus) pregnancy (see ASRM fact sheet and booklet titled Ectopic Pregnancy). Ectopic pregnancy can be very dangerous to the mother. It is important for women with tubal disease/blocked tubes or women who have had tubal surgery to see a healthcare provider as soon as they think they are pregnant or have missed their period in order to be evaluated and treated for an ectopic pregnancy before it causes serious complications. Irregular vaginal bleeding and lower abdominal pain are common symptoms associated with tubal pregnancy, particularly at later stages. If left untreated, tubal pregnancies can burst and cause internal bleeding, and even cause the death of the mother.
Other risks related to surgery for blocked tube/s are the same as with any surgery and include the possibility of bleeding; damage to other organs (body parts) such as blood vessels, your bladder and bowel (gut); development of new scar tissue; a reaction to the anesthesia; or a need for blood transfusion.

You should discuss with your healthcare provider whether surgery or other treatment, such as IVF, is better for you based on your situation.
Revised 2014