What are Uterine fibroids?

What are Uterine fibroids?

[one_half last=”no” spacing=”yes” background_color=”” background_image=”” background_repeat=”no-repeat” background_position=”left top” border_size=”0px” border_color=”” border_style=”” padding=”” class=”” id=””]
What are Fibroids?
Uterine fibroids (also called myomas or leiomyomas) are benign (non-cancerous) tumors of muscle tissue that can enlarge and/ or distort the uterus (womb) and sometimes the cervix. They start from the smooth muscle cells in the wall of the uterus.
Fibroids are usually found as multiple tumors. It is estimated that uterine fibroids will affect eight in 10 African-American women and seven in 10 Caucasian women by the time they reach menopause. Fibroids usually become noticeable during the reproductive years and become smaller after menopause. Most cause no symptoms and do not require treatment. However, depending on their size and location in the uterus, they may cause symptoms and require treatment.
What causes fibroids?

Fibroids happen when a genetically-altered single muscle cell in the wall of the uterus multiplies rapidly to form a tumor. The exact cause of fibroids is unclear, but evidence suggests that both genetics and hormones play roles. Estrogen (a hormone produced primarily by the ovaries) may stimulate the growth of fibroids. After menopause, when estrogen levels are low, fibroids rarely grow and frequently shrink. Their growth and development may also be influenced by progesterone, a hormone produced by the ovary after ovulation and during pregnancy. There is no evidence that any nutritional or lifestyle factors affect fibroid growth and development. Similarly, medications such as low-dose birth control pills have little or no impact on fibroid growth.
Where are fibroids found?
Fibroids are usually found in or around the body of the uterus but sometimes occur in the cervix (neck of the uterus). Fibroids within the uterus can be divided into three categories: subserosal, located in the outer wall of the uterus (55%); intramural, found in the muscular layers of the uterine wall (40%); and submucosal, which protrude into the uterine cavity (5%). Fibroids can be connected to the uterus through a stalk (pedunculated) or can be attached to nearby organs such as the bladder and bowel, or to the ligaments surrounding the uterus. Fibroids are rarely found outside the pelvic cavity.
What kind of symptoms do fibroids cause?
Symptoms of fibroids are related to their size and location. Most women with uterine fibroids have no symptoms. The most common symptoms are abnormal uterine bleeding, pain and pelvic pressure.
Abnormal uterine bleeding
Abnormal uterine bleeding is the most common symptom associated with fibroids located in or near the lining of the uterus and is the main reason for requesting treatment. Because abnormal uterine bleeding can result from other causes, such as endometrial cancer and hormonal problems, it is important that women with fibroids who experience abnormal vaginal bleeding receive a thorough evaluation for other causes of bleeding.
[/one_half][one_half last=”yes” spacing=”yes” background_color=”” background_image=”” background_repeat=”no-repeat” background_position=”left top” border_size=”0px” border_color=”” border_style=”solid” padding=”” class=”” id=””]
Pain
A rapidly enlarging fibroid may outgrow its blood supply and degenerate, causing pain and cramping. Fibroids which are attached to the uterus by a thin stalk may twist and cause severe pain. Large uterine fibroids may also make sexual intercourse or certain actions painful. Women with fibroids may also experience painful menstrual cramps.
Pressure symptoms 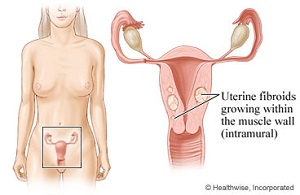 Large fibroids may press on nearby pelvic organs. If the fibroid presses on the bladder, which lies in front of the uterus, urinary frequency or urgency may occur. Pressure on the ureters, the tubes that transport urine from the kidneys to the bladder, can result in kidney damage if the fibroids are not removed. Fibroids in the lower uterus may put pressure on the large bowel and rectum, which could cause painful bowel movements, constipation, hemorrhoids, or altered shape of stools.
What happens to fibroids during pregnancy?
Fibroids may grow in pregnancy and, based upon their clinical significance, they may change the baby’s presentation at the time of delivery. In addition, fibroids increase the risk of a cesarean section, miscarriage, and premature delivery.
Can fibroids be cancerous?
Cancers arising from uterine fibroids are called leiomyosarcomas. The overall risk of fibroids being cancerous (malignant) is approximately one in 1,000 (of removed fibroids) in the reproductive years and is more common in postmenopausal women. A fibroid that grows after menopause may be a leiomyosarcoma, in which case removal of the uterus (hysterectomy) is required.
How are fibroids identified?
Pelvic exam
Uterine fibroids are often diagnosed by pelvic exam. During this examination, fibroids may be determined by assessing the shape and size of the uterus. Further imaging studies, like ultrasound, may be utilized to confirm this finding. Sometimes a pelvic exam alone may not be enough to distinguish a fibroid from an ovarian mass close to the uterus.
Ultrasound
Ultrasound uses the echoes from high-frequency sound waves to create a picture of the pelvic organs. As fibroids vary in size and location, both transvaginal and transabdominal ultrasounds may be used to best see the fibroids.
Sonohysterography
Sonohysterography is an ultrasound procedure in which the uterine cavity is outlined by a small amount of fluid which is placed in the uterus through a thin plastic tube. Sonohysterography improves the doctor’s ability to identify fibroids which protrude into or distort the uterine cavity.
Revised 2012

For more information on this and other reproductive health