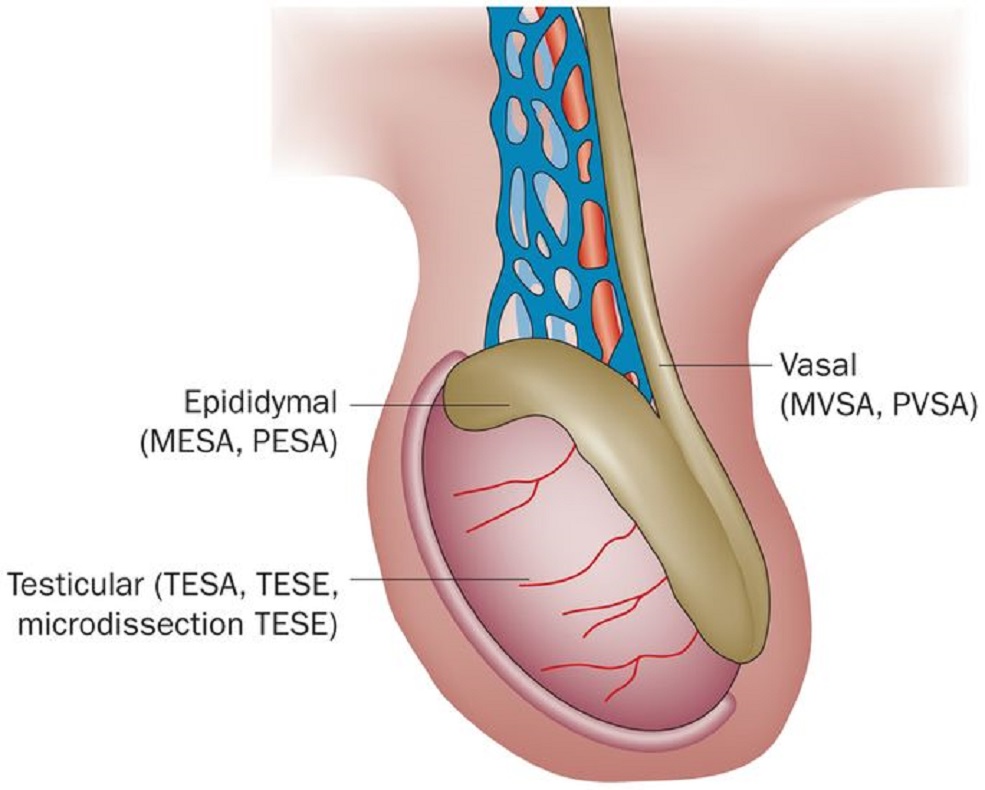 [one_half last=”no” spacing=”yes” background_color=”” background_image=”” background_repeat=”no-repeat” background_position=”left top” border_size=”0px” border_color=”” border_style=”” padding=”” class=”” id=””]
Why can men with SCI have infertility?
There are several reasons a man with a spinal cord injury (SCI) might have infertility. He may not be able to keep an erection long enough to have intercourse or ejaculate (release semen) during orgasm.
Men with SCI can also have inflammation or infection that can interfere with sperm function. Some men with SCI make less sperm because of reduced or uncoordinated nerve signals going to the testicles.
What treatments are available for infertile men with SCI?
When men with SCI can’t ejaculate, sperm can be collected in other ways.
How can sperm be obtained from men with SCI?
Sperm can be collected in one of three ways:
Vibratory stimulation:
Vibratory stimulation works best in men with spinal cord injury around the mid-back and is rarely effective with injuries below that level. During vibratory stimulation, a small machine that vibrates is placed on the penis to cause the release of semen. The semen can be used with intrauterine insemination (IUI) or in vitro fertilization (IVF). Sometimes, the semen can be put directly into the woman’s vagina.
Electroejaculation:

Electroejaculation is a procedure that uses electrical current applied to the back of the prostate gland through the rectum to stimulate the nerves around the prostate. This stimulation causes the release of semen. Semen can be obtained in most spinal cord-injured men with this technique. A catheter may be passed into the penis after the procedure to collect any semen that may have gone into the bladder. This procedure can be done in the office while the man is awake. If the man has enough sense to feel the procedure, it may need to be done
[/one_half][one_half last=”yes” spacing=”yes” background_color=”” background_image=”” background_repeat=”no-repeat” background_position=”left top” border_size=”0px” border_color=”” border_style=”solid” padding=”” class=”” id=””]
in an outpatient surgical facility under anesthesia. This treatment can cause a sudden increase in heart rate or blood pressure (autonomic dysreflexia) that requires medical intervention.
Testicular biopsy:
Testicular biopsy is a procedure where a small amount of testicular tissue is removed during surgery. Individual sperm is then taken out of the testicular tissue. This procedure can be done using a needle inserted into the testicle or by opening the testicle to remove a piece (biopsy). Sperm obtained with surgery must be used with intracytoplasmic sperm injection (ICSI).
Once the sperm is collected, how is it used to create a pregnancy?
Sperm can be put into the uterus with a syringe (IUI). They also may be used with IVF and ICSI. During IVF, a woman’s eggs are collected and placed together with the sperm in a laboratory to fertilize. The fertilized eggs are then returned to the womb. In some cases, one sperm is injected into each egg (ICSI) to fertilize the egg. Pregnancy is more likely after IVF (with or without ICSI) than with IUI, but IVF is more invasive and costs more.
For more information, see the ASRM booklet titled Assisted reproductive technologies and the fact sheet titled Intracytoplasmic sperm injection.
How do I know which method is right for us?
You should discuss your injury and goals with your doctor to find out which method is most appropriate
for you.
Revised 2014