STDs: Why The Cases are Increasing & Steps To Control It

As per the Centers for Disease Control and Prevention’s annual report done in the year 2016, the cases of certain sexually transmitted diseases like chlamydia, syphilis, and Gonorrhea increased exponentially between the years 2014-2015. 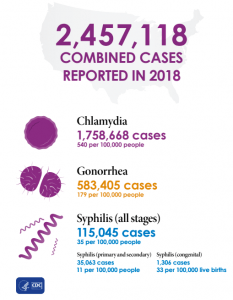 Each year sexually transmitted diseases cost around 16 billion dollars to the United States Healthcare system. Jonathan Mermin, the Director of the National Center for HIV/AIDS, Viral Hepatitis, STD, and TB Prevention (NCHHSTP), said in a statement, “We have reached a decisive moment for the nation. STD rates are rising, and many of the country’s systems for preventing STDs have eroded. We must mobilize, rebuild, and expand services — or the human and economic burden will continue to grow.”

Recommended Study on Reported STDs in the United States, 2018

As per health experts, there are many possible causes of STDs; therefore, it is very hard to blame one particular reason. Dr. Amesh A. Adalja, an infectious disease, pandemic preparedness, and Senior Scholar at the Johns Hopkins University Center for Health Security spoke in a statement saying, ”Some of this may have to do with the fact that in the past, a lot of sexually transmitted infections were decreasing because of people’s general fear of HIV, and when they took steps to prevent themselves from acquiring HIV, they also would by definition have some effect on other sexually transmitted infections as well,”.

He added saying, ”And what we’ve seen, is that the de-stigmatizing of HIV over the last several years — which is a god thing because we have very effective treatments and HIV is no longer a death sentence and is a chronic illness that people can live normal lives with — has caused people to be less cautious during sexual encounters.”

Certain sexually transmitted diseases like chlamydia, syphilis, and Gonorrhea can be cured with antibiotics’ help. However, as per Dr. Adalja, some strains of the pathogens cause these diseases to develop resistance to the drugs, making treatment extremely difficult. He explained that even with proper medical care if a person is infected with a strain that is drug-resistant, treating the disease, in that case, becomes very hard, which shows how drug resistance becomes a big hurdle while treating STDs.

According to the Centers for Disease Control and Prevention, antibiotic prescription in the United States has become so prevalent, leading to some strains becoming drug-resistant like, for instance, in the case of Gonorrhea. One more thing that leads to issues with treating and diagnosing sexually transmitted diseases is the fact that most people do not have easy access to treatment.

All health experts agree that the simple use of a condom can be extremely effective at preventing sexually transmitted diseases and a myriad of other types of infections.