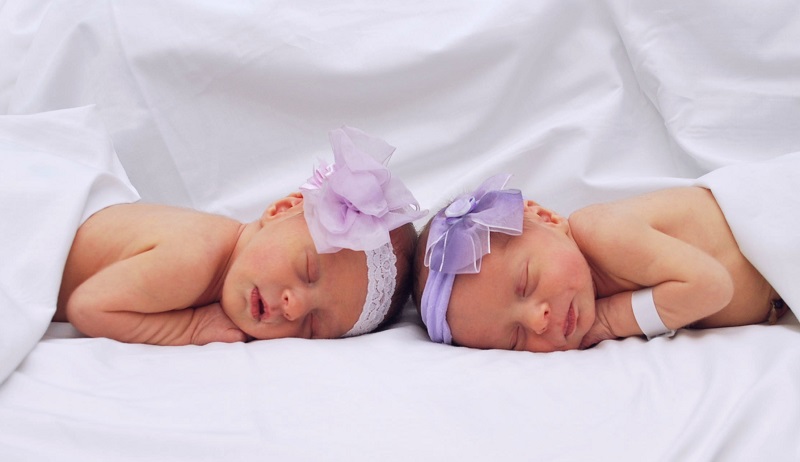 What causes a twin pregnancy?
Having twins runs in some families. The most important factor, however, is age. Women older than 30 years are more likely to have twins than are younger women. One reason is that women in their 30s—especially those in their late 30s—often release more than one egg during a menstrual cycle.
Women who take fertility drugs or use in vitro fertilization have a greater chance of having fraternal twins. Fertility drugs can cause more than one egg to be released. During in vitro fertilization, the egg is fertilized by a sperm in a lab. A doctor then places the embryo inside the uterus. If more than one embryo is transferred, twins, triplets, or even more can result.
What causes fraternal twins?
Usually, a woman releases one egg during ovulation. Fertilization occurs when one sperm joins with one egg. Sometimes, a woman releases two eggs, both of which can be fertilized by different sperm. When this occurs, it produces fraternal twins. These twins are no more alike than siblings born at different times. These twins can be boys, girls, or one of each. Each baby has its own placenta and amniotic sac.
What causes identical twins?
Identical twins occur when one fertilized egg splits and develops into two embryos. Identical twins may share a placenta or have separate placentas, but each baby usually has its own amniotic sac. Identical twins are the same sex and have the same blood type, hair color, and eye color. They usually look very much alike.
When is a twin pregnancy usually diagnosed?
A twin pregnancy usually is diagnosed during a routine ultrasound exam performed in the first trimester of pregnancy.
Are there more complications with a twin pregnancy than with a single pregnancy?
The risk of certain complications is higher in a twin pregnancy. Complications associated with a twin pregnancy include preterm labor, preterm birth, preeclampsia, gestational diabetes, and growth problems. Some of these problems may be prevented with early detection and care.
What is the most common complication of twin pregnancy?

The most common complication is preterm labor and preterm birth. Preterm labor is labor that starts before the end of 37 weeks of pregnancy. It can result in preterm birth. More than one half of all twins are born preterm.
What problems can babies who are born preterm have?
Preterm babies often have problems breathing and eating. They often have to stay in the hospital nursery longer than usual. Very preterm babies can die or have severe mental or physical problems. Problems also can occur as the babies grow and develop.
How can preterm birth be prevented?
Preterm birth sometimes can be prevented if preterm labor is found early enough. If you have preterm labor, you may be given a corticosteroid. This drug can help the babies’ lungs mature. In some cases, a drug called a tocolytic may be given to slow down or stop your contractions.
What is preeclampsia?
Preeclampsia is a disorder that occurs only during pregnancy. It usually starts after the 20th week of pregnancy. With twins, preeclampsia can start earlier and be more severe.
Preeclampsia can lead to serious problems for both the woman and babies. The only cure for preeclampsia is delivery of the babies, which may result in preterm birth.
What growth problems are more likely in twins?
Twins are more likely to be smaller than single babies. Ultrasound often is used throughout pregnancy to check the growth of each baby.
What are discordant twins?
Twins are called discordant if one twin is much smaller than the other. Discordant twins are more likely to have problems during pregnancy and after birth. Identical twins may be discordant because of problems with the placenta or twin–twin transfusion syndrome (TTTS).
What causes twin–twin transfusion syndrome (TTTS)?
TTTS can develop when identical twins share a placenta. It occurs when the blood flow between the twins becomes unbalanced. One twin will have too little blood. The other twin will have too much blood. This condition can pose serious problems for both babies. If the condition is not treated, both babies can die.
Can TTTS be treated?
TTTS can be treated during pregnancy by withdrawing some of the extra fluid with a needle or with surgery on the placenta. Sometimes, the twins may need to be delivered early.
How common are birth defects in twin pregnancies?
Birth defects occur twice as often in twin pregnancies because each baby is at risk of having a birth defect. The risk of birth defects also increases with the mother’s age.
How can I find out if my babies may have birth defects?
Your health care provider may do special tests to find out if your babies have certain birth defects. These tests include chorionic villus sampling (CVS) and amniocentesis.
What should I know before having chorionic villus sampling (CVS) or amniocentesis?
Before having one of these tests, you should know that

Is there a greater chance of cesarean delivery in a twin pregnancy?
The chance of needing a cesarean delivery is higher with twins. Twins usually can be born vaginally if they both are in the head-down position. A vaginal birth also may be possible when the lower twin is in the head-down position but the higher twin is not.
Can I breastfeed if I have twins?
It may be more difficult to breastfeed twins—especially if they were born preterm—but it can be done. Mother’s milk is the best food for any infant. It has the right amount of all the nutrients the babies need and adapts as your babies’ needs change. When you breastfeed, your milk supply will increase to meet the amount needed by your babies. If your babies are premature, you can pump and store your milk until they are strong enough to feed from the breast.
Glossary
Amniocentesis: A procedure in which a needle is used to withdraw and test a small amount of amniotic fluid and cells from the sac surrounding the fetus.
Amniotic Sac: A fluid-filled sac in the woman’s uterus where the fetus develops.
Cesarean Delivery: Delivery of a baby through incisions made in the mother’s abdomen and uterus.
Chorionic Villus Sampling (CVS): A procedure in which a small sample of cells is taken from the placenta and tested.
Corticosteroid: A hormone given to help fetal lungs mature, for arthritis, or for other medical conditions.
Discordant: A large difference in the size of fetuses in a multiple pregnancy.
Embryos: Developing fertilized eggs up to 8 completed weeks of pregnancy.
Fertilization: Joining of the egg and sperm.
Fraternal Twins: Twins that have developed from more than one fertilized egg; they are not genetically identical and each has its own placenta and amniotic sac.
Gestational Diabetes: Diabetes that arises during pregnancy.
Identical Twins: Twins that have developed from a single fertilized egg; they are usually genetically identical and may or may not share the same placenta and amniotic sac.
In Vitro Fertilization: A procedure in which an egg is removed from a woman’s ovary, fertilized in a dish in a lab with the man’s sperm, and then transferred to the woman’s uterus to achieve a pregnancy.
Ovulation: The release of an egg from one of the ovaries.
Placenta: Tissue that provides nourishment to and takes waste away from the fetus.
Preeclampsia: A condition of pregnancy in which there is high blood pressure and protein in the urine.
Preterm: Born before 37 weeks of pregnancy.
Tocolytic: A drug used to slow contractions of the uterus.
Trimester: Any of the three 3-month periods into which pregnancy is divided.
Twin–Twin Transfusion Syndrome (TTTS): A condition of identical twin fetuses when the blood passes from one twin to the other through a shared placenta.
Ultrasound Exam: A test that uses sound waves to examine the fetus.
Uterus: A muscular organ located in the female pelvis that contains and nourishes the developing fetus during pregnancy.
If you have further questions, contact your obstetrician–gynecologist.
FAQ092: Designed as an aid to patients, this document sets forth current information and opinions related to women’s health. The information does not dictate an exclusive course of treatment or procedure to be followed and should not be construed as excluding other acceptable methods of practice. Variations, taking into account the needs of the individual patient, resources, and limitations unique to the institution or type of practice, may be appropriate.
Copyright June 2012 by the American College of Obstetricians and Gynecologists. No part of this publication may be reproduced, stored in a retrieval system, posted on the Internet, or transmitted, in any form or by any means, electronic, mechanical, photocopying, recording, or otherwise, without prior written permission from the publisher.