The following methods are based on fertility awareness:

What is the Standard Days method?
The Standard Days method follows a standard rule of what days during the menstrual cycle are the most fertile. If your cycle is between 26 days and 32 days long, the Standard Days method considers days 8–19 to be the most fertile days. To prevent pregnancy, you should avoid having intercourse or use a barrier method of birth control on these days. To promote pregnancy, you should try to have intercourse between day 8 and day 19, either every day or every other day. The Standard Days method works best if your cycles are regular and are consistently between 26 days and 32 days long.
What is the cervical mucus method?
The cervical mucus method involves recognizing changes in the mucus produced by the cervix and in how the mucus looks and feels. Just before ovulation, the amount of mucus made by the cervix noticeably increases, and the mucus becomes thin and slippery. Just after ovulation, the amount of mucus decreases, and it becomes thicker and less noticeable. To prevent pregnancy, you should avoid sexual intercourse or use a barrier method of birth control from the time you first notice any cervical mucus. To promote pregnancy, you should have intercourse every day or every other day when the thin and slippery cervical mucus is present.
When using methods that rely on cervical mucus, be aware of any changes in your health or daily routine that could make reading the signs of ovulation difficult. Medications, feminine hygiene products, douching, sexual intercourse, or having a pelvic exam in which lubrication is used all can change how the cervical mucus appears.
What is the TwoDay method?
The TwoDay method is a variation of the cervical mucus method. With the TwoDay method, you check your cervical mucus at least twice a day and then ask yourself two questions:
1. Did I notice any secretions today?
2. Did I notice any secretions yesterday?
If you noticed cervical mucus today or yesterday, you most likely are fertile. To prevent pregnancy, you should avoid sexual intercourse or use a barrier method of birth control. To promote pregnancy, you should have sexual intercourse every day or every other day when you notice secretions. If you did not notice any cervical mucus today and yesterday (2 dry days in a row), pregnancy is less likely.
What is the basal body temperature method?
The BBT is your body’s temperature when you are fully at rest. In most women, the body’s normal temperature increases slightly during ovulation (0.5–1°F) and remains high until the end of the menstrual cycle. The most fertile days are the 2–3 days before this increase in temperature. To monitor your BBT, take your temperature every morning after waking up, before any activity, getting out of bed, or having anything to eat or drink. Record these temperatures daily.
BBT by itself is not a good way to prevent or promote pregnancy. It shows only when ovulation has already occurred, not when it is going to occur. Also, keep in mind that if you have a fever (for example, if you have an ongoing medical condition or if you get sick with the flu), the BBT method may not be reliable.
What is the symptothermal method?
The symptothermal method is a combination of methods. The two most commonly used are the BBT method and the cervical mucus method. Other methods or signs can be used, such as the Standard Days method, as a double check to identify when the fertile time begins and ends.
What are the advantages of using fertility awareness-based methods to prevent pregnancy?
They cost very little to use. Many women like the fact that fertility awareness is a form of birth control that does not involve the use of medications or devices.
What are the disadvantages of using fertility awareness-based methods to prevent pregnancy?
Using fertility awareness to prevent pregnancy does not protect against sexually transmitted infections, including human immunodeficiency virus (HIV). Fertility awareness-based methods may not be a good choice if you are at high risk of getting a sexually transmitted infection. These methods also need the cooperation of your male partner.
Where can I learn about using these methods?
If you are interested in using fertility awareness to prevent pregnancy, it may be best to learn the method from a qualified teacher or group. Your healthcare provider or your state or county health department may be able to provide you with information about where to find a teacher. Tools such as smartphone apps and websites also are available to help you record information about your menstrual cycle and calculate your fertile periods.
Can anyone use these methods to prevent pregnancy?
There are some situations in which the use of fertility awareness-based methods to prevent pregnancy may be more difficult. If any of the following conditions apply to you, you may need extra training to make sure you are using fertility awareness correctly:

Is there anyone for whom these methods are not recommended to prevent pregnancy? 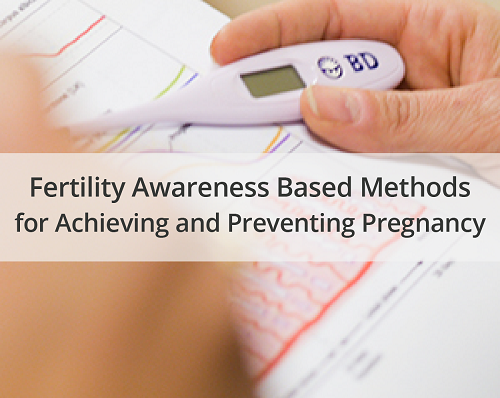 These methods should be used with caution if you have any of the following:

Glossary
Barrier Method: Contraception that prevents sperm from entering the female reproductive system.
Basal Body Temperature (BBT): The temperature of the body at rest.
Cervix: The lower, narrow end of the uterus at the top of the vagina.
Egg: The female reproductive cell produced in and released from the ovaries; also called the ovum.
Fallopian Tube: One of two tubes through which an egg travels from the ovary to the uterus.
Fertility Awareness: Predicting when a woman is most fertile based on signs and symptoms of ovulation or on a standard rule of when the fertile period occurs during a typical menstrual cycle.
Human Immunodeficiency Virus (HIV): A virus that attacks certain cells of the body’s immune system and causes acquired immunodeficiency syndrome (AIDS).
Menopause: The time in a woman’s life when menstruation stops; defined as the absence of menstrual periods for 1 year.
Menstrual Cycle: The monthly process of changes that occur to prepare a woman’s body for possible pregnancy. A menstrual cycle is defined from the first day of menstrual bleeding of one cycle to the first day of menstrual bleeding of the next cycle.
Ovary: One of a pair of organs in the female reproductive system that contain the eggs released at ovulation and produce hormones.
Ovulation: The release of an egg from one of the ovaries.
Sexual Intercourse: The act of the penis of the male entering the vagina of the female (also called “having sex” or “making love”).
Sexually Transmitted Infections: Infections that are spread by sexual contact, including chlamydia, gonorrhea, human papillomavirus infection, herpes, syphilis, and infection with human immunodeficiency virus (HIV, the cause of acquired immunodeficiency syndrome [AIDS]).
Symptothermal Method: A fertility awareness method that uses temperature and other signs and symptoms of ovulation to predict the fertile period in a woman’s menstrual cycle.
If you have further questions, contact your obstetrician–gynecologist.
FAQ024: Designed as an aid to patients, this document sets forth current information and opinions related to women’s health. The information does not dictate an exclusive course of treatment or procedure to be followed and should not be construed as excluding other acceptable methods of practice. Variations, taking into account the needs of the individual patient, resources, and limitations unique to the institution or type of practice, may be appropriate.
Copyright April 2015 by the American College of Obstetricians and Gynecologists