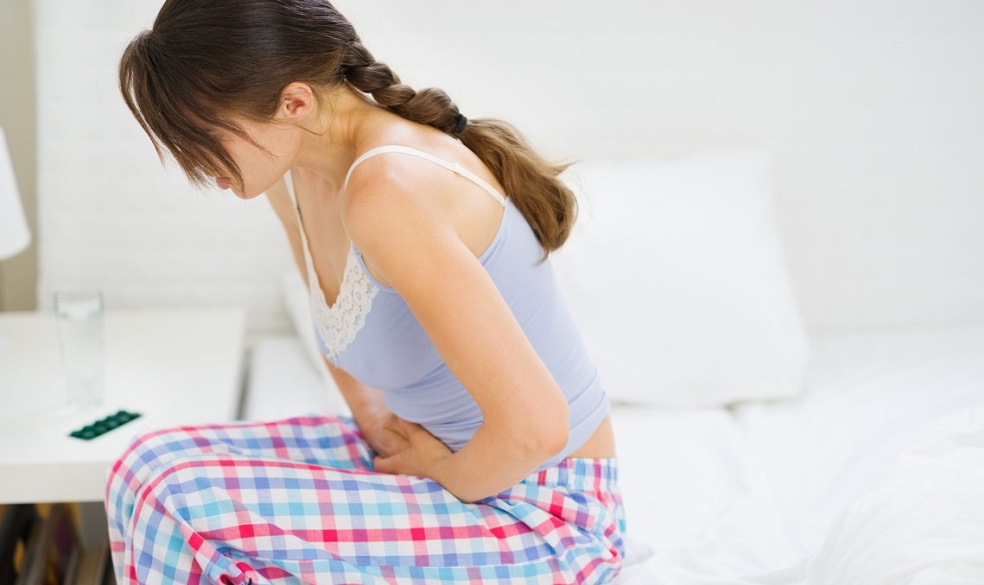 How common is dysmenorrhea?
Dysmenorrhea is the most commonly reported menstrual disorder. More than one-half of women who menstruate have some pain for 1–2 days each month.

What is primary dysmenorrhea?

Primary dysmenorrhea is pain that comes from having a menstrual period, or “menstrual cramps.”

Dysmenorrhea is the medical term for pain with menstruation. There are two types of dysmenorrhea: “primary” and “secondary”.

Primary dysmenorrhea is common menstrual cramps that are recurrent (come back) and are not due to other diseases. Pain usually begins 1 or 2 days before, or when menstrual bleeding starts, and is felt in the lower abdomen, back, or thighs. Pain can range from mild to severe, can typically last 12 to 72 hours, and can be accompanied by nausea-and-vomiting, fatigue, and even diarrhea. Common menstrual cramps usually become less painful as a woman ages and may stop entirely if the woman has a baby.

Secondary dysmenorrhea is pain that is caused by a disorder in the woman’s reproductive organs, such as endometriosis, adenomyosis, uterine fibroids, or infection. Pain from secondary dysmenorrhea usually begins earlier in the menstrual cycle and lasts longer than common menstrual cramps. The pain is not typically accompanied by nausea, vomiting, fatigue, or diarrhea.

Primary dysmenorrhea usually is caused by natural chemicals called prostaglandins. Prostaglandins are made in the lining of the uterus.

When does the pain associated with primary dysmenorrhea occur during the menstrual period?

At what age does primary dysmenorrhea start? 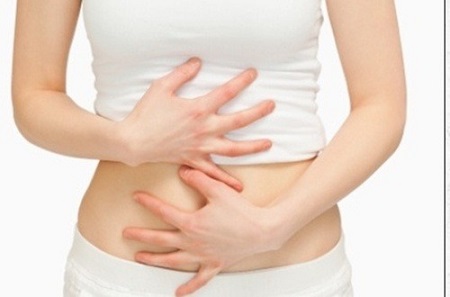 What is secondary dysmenorrhea?

Secondary dysmenorrhea is caused by a disorder in the reproductive system. It may begin later in life than primary dysmenorrhea. The pain tends to get worse, rather than better, over time.

When does the pain associated with secondary dysmenorrhea occur during the menstrual period?

The pain of secondary dysmenorrhea often lasts longer than normal menstrual cramps. For instance, it may begin a few days before a menstrual period starts. The pain may get worse as the menstrual period continues and may not go away after it ends.

How does secondary dysmenorrhea cause menstrual cramps?

What disorders can cause secondary dysmenorrhea?

Some of the conditions that can cause secondary dysmenorrhea include the following:

What tests are done to find the cause of dysmenorrhea?

How can I know if the dysmenorrhea (pain of menstrual cramps) I’m having is normal?

If you have severe or unusual menstrual cramps or cramps that last for more than 2 or 3 days, contact your healthcare provider. Both primary and secondary menstrual cramps can be treated, so it’s important to get checked.

First, you will be asked to describe your symptoms and menstrual cycles. Your healthcare provider will also perform a pelvic exam. During this exam, your doctor inserts a speculum (an instrument that lets the clinician see inside the vagina) and examines your vagina, cervix, and uterus. The doctor will feel for any lumps or changes, and a small sample of vaginal fluid may be taken for testing.

If secondary dysmenorrhea is suspected, further tests may be needed. If a medical problem is found, your healthcare provider will discuss treatments.

If you use tampons and develop the following symptoms, get medical help right away:

These are symptoms of toxic shock syndrome, a life-threatening illness.

How is dysmenorrhea treated?

Your health care provider may recommend medications to see if the pain can be relieved. Pain relievers or hormonal medications, such as birth control pills, often are prescribed. Some lifestyle changes also may help, such as exercise, getting enough sleep, and relaxation techniques.
If medications do not relieve pain, treatment will focus on finding and removing the cause of your dysmenorrhea. You may need surgery. In some cases, a mix of treatments works best.

What medications are used to treat dysmenorrhea?

Certain pain relievers, called nonsteroidal anti-inflammatory drugs (NSAIDs), target prostaglandins. They reduce the number of prostaglandins made by the body and lessen their effects. These actions make menstrual cramps less severe.
NSAIDs work best if taken at the first sign of your menstrual period or pain. You usually take them for only 1 or 2 days. Women with bleeding disorders, asthma, aspirin allergy, liver damage, stomach disorders, or ulcers should not take NSAIDs.

The hormonal intrauterine device or IUD can be used to treat dysmenorrhea as well.

What types of medication can be used to treat dysmenorrhea caused by endometriosis?

If your symptoms or a laparoscopy point to endometriosis as the cause of your dysmenorrhea, birth control pills, the birth control implant, the injection, or the hormonal intrauterine device can be tried. Gonadotropin-releasing hormone agonists are another type of medication that may relieve endometriosis pain. These drugs may cause side effects, including bone loss, hot flashes, and vaginal dryness. They usually are given for a limited amount of time. They are not recommended for teenagers except in severe cases when other treatments have not worked. 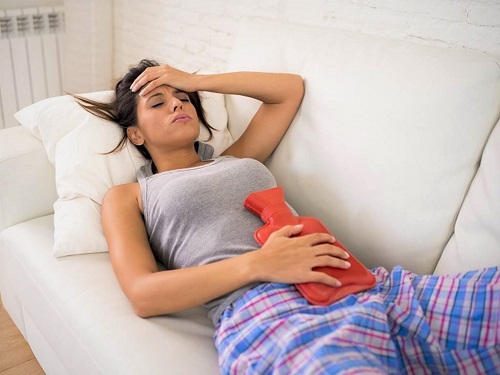 Certain alternative treatments may help ease not enough research has been done to recommend dysmenorrhea. them as effective Vitamin treatments B or magnesium supplements may be helpful, but for dysmenorrhea. Acupuncture has been shown to be somewhat helpful in relieving dysmenorrhea.

What is done during UAE?
In this procedure, the blood vessels to the uterus are blocked with small particles, stopping the blood flow that allows fibroids to grow. Some women can have UAE as an outpatient procedure.

What complications are associated with UAE?
Complications include infection, pain, and bleeding.

When is surgery done to treat dysmenorrhea?
If other treatments do not work in relieving dysmenorrhea, surgery may be needed. The type of surgery depends on the cause of your pain.
If fibroids are causing the pain, sometimes they can be removed with surgery. Endometriosis tissue can be removed during surgery. Endometriosis tissue may return after the surgery, but removing it can reduce the pain in the short term. Taking hormonal birth control or other medications after surgery may delay or prevent the return of pain.

Hysterectomy may be done if other treatments have not worked and if the disease-causing the dysmenorrhea is severe. This procedure normally is the last resort.

Adenomyosis: A condition in which the tissue that normally lines the uterus begins to grow in the muscle wall of the uterus.
Adhesions: Scarring that binds together the surfaces of tissues.
Bladder: A muscular organ in which urine is stored.
Dysmenorrhea: Discomfort and pain during the menstrual period.
Endometriosis: A condition in which tissue that lines the uterus is found outside of the uterus, usually on the ovaries, fallopian tubes, and other pelvic structures.
Estrogen: A female hormone produced in the ovaries.
Fallopian Tubes: Tubes through which an egg travels from the ovary to the uterus.
Fibroids: Benign growths that form in the muscle of the uterus.
Gonadotropin-releasing Hormone Agonists: Medical therapy used to block the effect of certain hormones.
Hormones: Substances produced by the body to control the functions of various organs.
Hysterectomy: Removal of the uterus. Intrauterine Device: A small device that is inserted and left inside the uterus to prevent pregnancy.
Laparoscopy: A surgical procedure in which an instrument called a laparoscope is inserted into the pelvic cavity through small incisions. The laparoscope is used to view the pelvic organs. Other instruments can be used with it to perform surgery.
Menstruation: The monthly discharge of blood and tissue from the uterus that occurs in the absence of pregnancy.
Ovaries: Two glands, each located on either side of the uterus, that contain the eggs released at ovulation and that produce hormones.
Pelvic Exam: A manual examination of a woman’s reproductive organs.
Progestin: A synthetic form of progesterone that is similar to the hormone produced naturally by the body.
Prostaglandins: Chemicals that are made by the body that have many effects, including causing the muscle of the uterus to contract, usually causing cramps.
Ultrasound Exam: A test in which sound waves are used to examine internal organs.
Uterus: A muscular organ located in the female pelvis that contains and nourishes the developing fetus during pregnancy.

If you have further questions, schedule an appointment today.

Designed as an aid to patients, this document sets forth current information and opinions related to women’s health. The information does not dictate an exclusive course of treatment or procedure to be followed and should not be construed as excluding other acceptable methods of practice. Variations, taking into account the needs of the individual patient, resources, and limitations unique to the institution or type of practice, may be appropriate.